Just another day in the village

A few days ago I noticed that Hoggie had a nasty gash behind her front leg.  It looked infected and swollen and generally awful, so I sought the advice of Crazy Cat Guy.

Crazy Cat Guy lives a few houses over in our village and can often be seen feeding cats, talking to cats, carrying a wailing box of cat to who-knows-where with a pack of cats on his heels, so I figured he'd know what to do.

He gave me some ointment to put on the wound but it didn't seem to get better so I borrowed a cat carrier and headed to the vet this morning with a howling Hoggie in tow.

Limping the eight blocks to the vet, sweating and swearing profusely in the rain, with a screaming cat and a foot brace that decides to break halfway through the journey and is now flapping around, I get lots of looks.  Most full of pity.  Some amused.  All punchable.


I arrive and they recognize Hoggie because Crazy Cat Guy has brought her in before.  It turns out her "real name" is Astoria.  Oh, that's nice. 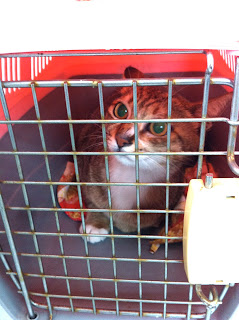 Hoggie/Astoria FREAKING OUT and waiting to be seen by the vet.


The vet calls me in and opens Hoggie's carrier to examine the cut and Hoggie emerges like a cat out of hell.  She jumps from the table screaming bloody murder, then up the wall - taking down the cordless phone and the miniblinds - then circles the room bellowing until presented with her carrier.  She bolts in, leaving a trail of destruction and a terrified vet in her wake, and cowers in the corner.  Okay.

The vet tells me that Hoggie will need to be sedated to get stitches because she's "wild".  I try to explain that she's really very sweet, but the vet is hearing nothing of it.

After filling out endless forms stating that I'm financially responsible, that I understand the risks of sedation, etc., a vet tech comes to take Hoggie away, and recognizes her -

I'm supposed to go pick her up in a few hours but she'll need to wear the cone of shame for at least a week.  How do I manage this?


UPDATE:  Hoggie is still at the vet, as the wound was deeper than initially thought.  She'll be home in a few days and due to cooperative effort between Crazy Cat Guy, Nicey Girl (another neighbor), and me, she will be taken care of.  Village power activate!

Followers (the ones who admit it, anyway)