One of my first boyfriends once commented on my "natural grace" and said he loved to see me walk across a room.  When I told my now-husband about this he laughed so hard I thought he was going to stroke out.  Somewhere between 16 and 40 I grew out of that grace in a big way.

I got my feet tangled in the cord to my laptop, spazzed out, and went down.  The husband was awoken to a strangled "GARRRGHHH" closely followed by a crash.  He came out of the bedroom to find me crumpled up on the floor crying, casually stepped over me, and made a bowl of cereal.  I continued to weep.  (To be fair, he often finds me crying in a heap on the floor - see above regarding the loss of my natural grace.)  After he'd finished his cereal, put his dish in the sink and run water in it (it only took me ten years to train him to do that), he came over, hoisted me up by the armpits, and dragged me to a chair.

I spent the rest of the day watching my toe swell bigger and bigger, elevating and icing it, and popping panadol every few hours. I insisted it was broken while the husband insisted that I would be in much more pain if it was broken and said I was exaggerating. Oh, but I was not.

I hobbled to a local doctor the next day to get a referral to the hospital for x-rays.  And this is where it gets weird.

At the hospital they x-ray my foot and find that it's fractured in several places and the cartilage in the joint is shredded.  On the x-ray the proximal end of my distal metatarsal (I think... it's been a while since my physical anthro class) looks like cookie crumbs.  The doctor looks it over and says I'll be admitted to the hospital and an orthopedic surgeon will take a look at it.  Okay that's fi- WHAT?  "Admitted?"  Wait - does that mean I'm going to stay overnight?  For a toe?  Apparently so, because the orthopedist can't see me until the next day.  I ask to go home and return tomorrow - nope, the place that rents crutches is already closed.  (This is a hospital - they can't access crutches?)  What if my husband goes and buys me crutches - can I go home then?  Nope.  Sigh.

I'm then wheeled up to a bed in a ward with five other women and made to put on hospital-issue flannel pajamas. 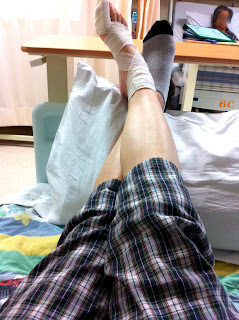 These are supposed to be full-length pants.

About an hour later two nurses appear to give me the intake questionnaire - two of them stand at the end of my bed and after I answer each question they look at each other and giggle wildly:

After my intake I get up to use the toilet and the nurses FREAK OUT.  To complete my utter humiliation, any time I need to use the toilet a nurse must transfer me to a wheelchair with a toilet seat instead of a regular seat, wheel me to the restroom, and park it over the toilet, where I am (thankfully) allowed to pee in peace but must then ring a bell for another nurse to come fetch me.  I immediately cease all liquid consumption.

So, in a stifling hot ward in flannel pajamas, I settle in for the evening with my ward-mates.

The woman to the left of me slept the entire time I was there.  She woke up only to eat, belch, and then roll over and go back to sleep.

The woman to the right of me spent all of her time talking on her cell phone and applying makeup.  I never saw her have any visitors, so I suppose she was just applying makeup for the nurses.

The woman to my far right had her arm in a homemade sling, which was then encased in the foam that's used for padding in boxes of new appliances.  Like, a big square foam thing that she (or the hospital) had cut a hole in for her arm.  It looked like she had a well-packaged new blender stuck to her torso.

The woman kitty-corner to me would have random sneezing fits during which she also passed gas uncontrollably.  I was glad she was across the room.

And the woman directly across from me was hooked up to some monitor that showed two lines.  One monitored her heartbeat and I'm not sure what the other monitored, but every ten minutes or so it would flatline and flash red while an alarm would WHOOP WHOOP WHOOP for several minutes before a nurse would shuffle in, turn the alarm off without looking at the patient, and shuffle back out.  This went on all. night. long.

Everything is fine - WHOOPING and farting and snoring and me staring wide-eyed and sleepless at the ceiling tiles  - until around 4 am when the pain sets in.  Some of the worst pain I've ever felt.  It feels like someone is jamming the underside of my toenail with an icepick (I later learn that the swelling is causing bone fragments to move around and stab me).  I repeatedly press the nurse call button begging for something - anything.  I'm sweating and squirming and they finally concede to an ibuprofen.  One ibuprofen.  ONE. After much more begging they give me an ice pack.  And after an hour of multiple call button pressings and uncontrollable sobbing, they finally have a nurse hold me down while another says "calm down" and jabs a syringe full of tramadol in my arm.  Thank god.  I manage two hours of sleep after that.

After a hearty breakfast of congee and bread the next morning - 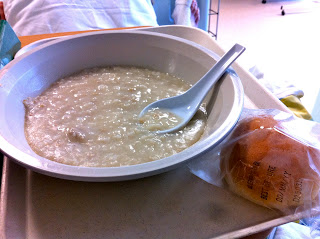 Full of flavor!  (And the bones of last night's chicken.)

- I lie around for hours waiting for the doctor to see me.  I've been told I may require surgery, but the orthopedist needs to carefully examine my foot to see what the best course of action will be.  Around noon a young guy in jeans and a white coat strides up to my bed, flips through my chart for a couple of seconds, and says "okay - you splint. Monday cast."  WTF.

I'm so freaking exhausted and done with this shit by now that I throw an absolute fit and refuse to stay, so I'm granted "weekend leave."  This means I get to go home if I agree to return on Monday morning.   The husband buys me some crutches and I hobble off.

Monday morning rolls around and I'm seriously toying with the idea of skipping out altogether but I'm worried they'll issue some sort of bench warrant so I show up at Orthopedics only to be directed back to my bed.  They've saved my bed for me.  Still unmade with my dirty flannel pajamas wadded in a ball on top.  It's apparently beyond comprehension that I should simply sit in a waiting room until it's time to get my cast - nope, I must lie in the same room with the same women, listening to the WHOOP WHOOP WHOOP, the sneeze-farting, and the blaring Cantonese soap operas.  I initially refuse to don the pajamas but the nurse looks horrified and returns with a supervisor who says I must.  I retaliate by demanding a pitcher of cold water rather than the hot water they bring to everyone.  FIGHT THE POWER.

Around ten I'm wheeled down to get my cast.  A young woman takes a mold of my foot, disappears into another room and returns an hour later saying, "One moment - I injure myself" and holds up a bloody bandaged finger.  She's somehow mangled her finger while making my cast.  Dammit - NOTHING is easy here.  (Note: "one moment" can mean anything from five minutes to five hours - that's the takeaway lesson from this whole ordeal.)  An hour or so later I'm fitted with my new cast and wheeled back upstairs to my bed.

Where I wait.  And wait.  Lunchtime comes and goes, and I continue waiting. 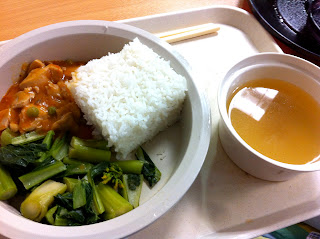 This was disgusting, but I was starving.  Don't judge me.


Finally, I ask someone - I've got my cast and my crutches so what exactly am I waiting for?  Oh, I'm waiting for "physical therapy" - that makes sense.

A few more hours pass.  Finally a young guy shows up with a gaggle of nurses and wheels me to the stairwell.  The "physical therapy" consists of him demonstrating how to go up and down stairs with crutches, then having me do it while one nurse walks in front of me backwards, one walks beside me, and one walks behind me holding the waistband of my pants.  I'm not quite sure what the plan is because I'm pretty sure I outweigh the three of them put together and if I were to fall I'd take them all out easily.  This "therapy" lasts all of five minutes and I'm finally allowed to leave.  I've been at the hospital for eight hours for a total of one hour of medical attention.

The husband comes to pick me up and we head out.  Three days of hospital care for a total of two hours of medical attention and at a cost of approximately $50 USD. 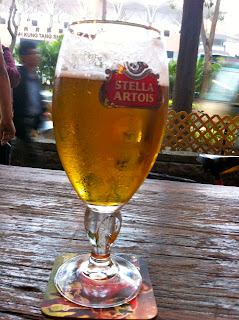 And thus the saga ends as every saga should - with beer, my loyal Argos.

Followers (the ones who admit it, anyway)